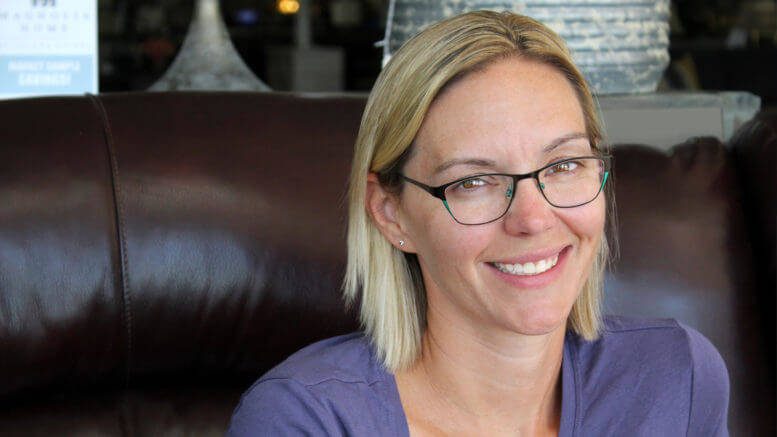 Mandy Jeffries isn’t afraid to try something different. Maybe that’s why Colfax Furniture is so successful.

HFA member Mandy Jeffries understands that life changes, plans change, dreams, too. Sometimes that change comes slowly, imperceptible at first. Other times change comes suddenly without any warning. The key, says Jeffries, is being able to evolve and adapt when the inevitable change comes. That flexibility is what got Jeffries through middle school, when she was sent to a military academy, so her mother could make a go of it running Colfax Furniture, the family business. Or when Jeffries, who swore she would never work in the family business, was asked to do just that 10 years ago.

“I’ve always thought of myself as easy-going, someone who can adapt and adjust when needed,” says Jeffries. “I think that’s helped me in all parts of my life.”

These days that adaptability is on display every morning at a trailer camp in Myrtle Beach, S.C., where Jeffries and her family are spending the summer, one eye on the weather, the other on the furniture store back in Greensboro, N.C.

When Jeffries was informed earlier this year the daycare her two children attend would be closed this summer for renovations, she decided to adapt—at the beach.

Jeffries is spending the summer with 4-year-old Jace and 2-year-old Paige at the family’s permanent trailer park by the ocean. As Jeffries tells it, there wasn’t much of a decision to make at all. “Everything I do as a mom or in the business has been with my kids in mind.”

And so, summertime for Mandy Jeffries consists of pool time, walks on the beach, snacks under an umbrella and naps. Oh, sure, it’s weekly phone calls back to the office and an occasional trip home to help with a sale. But mostly it’s reading books by day, and smores by night.

Jeffries has a word to describe her decision. “Heaven,” she says. “There’s times it gets a little crazy, but for the most part it’s heaven. I’m hoping I never forget this summer. I hope they can remember it.”

Now comes the rub: With Jeffries out of the store this summer, Colfax Furniture’s employees are learning to adapt themselves. In fact, Jeffries believes her staff is becoming stronger and smarter because of her absence.

“I think a lot of them had to step outside what they were comfortable with and take on different responsibilities, make decisions without me, and they’ve really come through,” says Jeffries. “It’s amazing what they can do without me.” Jeffries laughs. “Maybe even a little scary.”

Jeffries said the staff is going to gather in September and discuss what everyone learned this summer and where there might be weaknesses that can be improved upon. She’s convinced the store will be much improved by her absence. “Everyone’s benefitted from the change,” she says. “We’ve all grown a little this summer.”
Safe to say Colfax Furniture has grown through the years, too. The company got its start in 1966 when Jeffries’ great uncle learned that the local Sears department store burned most of the returns and damaged items it took back from customers. Jeffries’ great uncle made a pitch to Sears: Instead of destroying everything, he’d buy it from the company at pennies on the dollar.

And, thus, Colfax Furniture was born. Well, not quite.

The great uncle took the unwanted products to Jeffries’ aunt. Jackie Landreth owned a motel in Colfax, N.C. (a suburb of Greensboro). She turned her parking lot into a department store. You name it—clothes, tools, toys, appliances—Landreth sold it all in her parking lot.

“It didn’t take my aunt long to see furniture had the biggest margin,” says Jeffries.

And thus, Colfax Furniture was born. Well, not quite. But we’re getting close.

With a stack of cash and a shotgun by her side, Landreth started driving the family truck to Hickory, N.C. (a 90-mile trek one way), which at the time was home to many furniture manufacturers. Landreth loaded up on furniture and brought it back to sell in her parking lot. “She started making weekly trips and then she was making trips every day and the business just took off,” says Jeffries.

Eventually, Landreth decided she needed to upgrade the store from a parking lot to a building and then Colfax Furniture was born.

At one point, Colfax was run entirely by Landreth and other stay-at-home moms, unheard of in the late 1960s. By the time Jeffries was in elementary school, her mother, Gail Jeffries, was taking on more responsibility at the store. As business grew, Gail Jeffries and Landreth, both single mothers, made tough decisions of their own: They told their children they would have to attend a military school, so they could dedicate themselves to growing the store. Mandy attended one in Florida for three years before coming home to attend high school.

Jeffries never thought her mother was picking the business over her. “Mom was just doing what I do now. I owe it to my kids to do everything I can to make their lives better and this store is one of those ways,” Jeffries says.

To that end, Jeffries is easy to spot at a furniture market or the HFA’s Leadership Immersion Program, or any industry-related conference or seminar. She’s the one with two children by her side. Colfax Furniture, with four stores in central North Carolina, is a second home to Jace and Paige. It’s not uncommon to find a portable crib, playpen or stroller in one of the stores.

“They’ll go almost anywhere with me,” she says. “There’s going to be a time when they won’t so I’m enjoying this while I can.”

Mandy Jeffries said her mother raised her “not to be in the business at all.” For the longest time that plan was working. She went off to college, earned a degree in finance and settled into a job in Fayetteville, N.C., two hours from home. “It was a good life,” Jeffries recalls. “Not a lot of change. Just the same old, same old most people’s jobs resemble.”

Turns out mom was wanting to ease out of the family furniture business. There was just one problem: She wasn’t ready to turn things over to someone outside the family.

“I was the only one in the family who might be interested,” Mandy Jeffries recalls. “Mom asked me to try it out and see if I liked the job, see if I wanted to do this.”

Yes, to quitting her financing job. Yes, to moving home. Yes, to changing everything about her life.

Gail Jeffries put her daughter to work in merchandising as an assistant, but, really, Mandy Jeffries did everything—from cleaning bathrooms to working in the warehouse.

Jeffries enjoyed working in merchandising because “You can’t know anything until you know your product and I didn’t know any of that. I was a complete outsider coming in.”

That was 10 years ago. These days everything seems old hat to Colfax’s president. But that doesn’t mean Jeffries is complacent. “I don’t ever want to get into that place where I feel complacent, you know what I mean?” says Jeffries. “I don’t think that’s a good place for anyone to be no matter who they are or what they do for a living.”

Colfax bills itself as one of the nation’s largest showrooms that deals in market samples. The company’s 60,000-square-foot flagship store is a 15-minute drive from High Pont. Twice a year Jeffries and her staff and temporary hires, will clean out a manufacturer’s showroom and distribute the furniture to Colfax’s four stores. Samples make up about 40 percent of Colfax’s inventory. The labor costs involved in rounding up all those truckloads of samples eat into the margins, but Jeffries says she can’t put a price on Colfax’s status as one of the largest carriers of market samples. She advertises those market samples heavily in her print and TV ads.

“People come in here every day asking about our market samples,” Jeffries says. “It gets them into the store. It’s a headache, a twice-a-year headache, but you can’t beat the traffic it generates for us.”

Jeffries is more than just a furniture retailer. She’s active in the industry, serving as an HFA board member and, maybe her favorite job, as president of the association’s Next Generation Now group, which brings together young members in the industry to network and grow from others their age as well as from seasoned industry leaders.

“It’s great getting together with these people,” she says. “They’re my peers but they’re my friends, too and we’re always helping each other out. We’re really the future of the industry so let’s see what ideas we have that we can share with each other and everyone can benefit from.”

And while they’re still too young for Next Gen Now, Jeffries is always thinking about her children. Just like her mom, Mandy Jeffries promises not to pressure Jace and Paige about the family business. “They are going to follow their own dreams,” she says. “If that happens to be here, that’s great. If that happens to be somewhere else doing something entirely different, that’s great, too.”

“Hands down I’m a member for all the Next Gen Now opportunities. You can’t put a price on the learning that comes from a Lunch with Leaders or the networking at a conference. The education is so important to me. I learn so much at a Next Gen event just by having a drink at a bar with other members.” 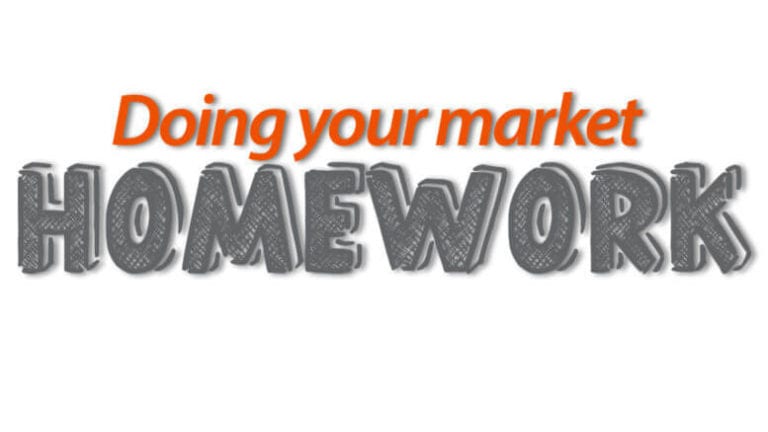 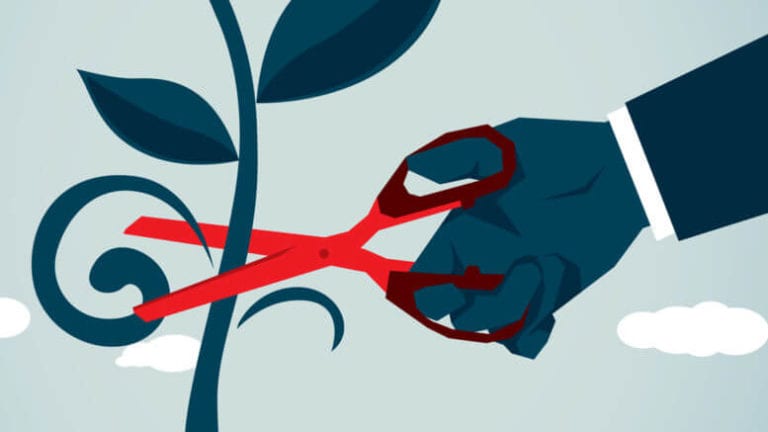