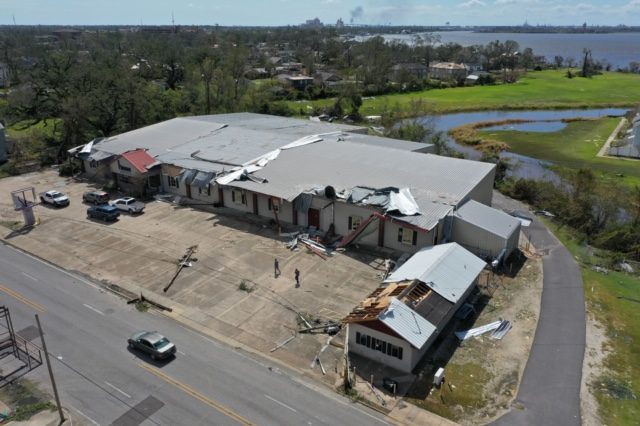 Lake Charles took the brunt of powerful Hurricane Laura last week. Not only did the storm pack 140 mph winds when it roared over the southern Louisiana city, but “I really think we got hit by a tornado in addition to the hurricane,” Kemp said.

Laura didn’t push storm surge into Lake Charles, but extensive roof damage to most buildings let in lots of rain. That was the case for the Home Furniture Plus Bedding structure.

Kemp planned to meet with his contractor Tuesday but thought it will take 30 to 60 days to make repairs and open the store again. Fortunately, the 75-year-old business is strong in e-commerce and has other stores with plenty of product in stock that can serve Lake Charles-area customers. Those include stores in Lafayette and New Iberia, La., and Beaumont and Nederland, Texas. Many Lake Charles-area residents will need home furnishings as they return home and make repairs.

The Beaumont, Texas, flagship reopened Saturday. The store in Nederland, Texas, was back in business today.

But Lake Charles, La., was hit hard by the massive storm. However, Howell’s location there sustained only cosmetic exterior damage and no flooding or wind impact inside, Hanley reported. The problem is that the entire city and surrounding areas lack power.

So, Howell plans to bring in a generator and sell mattresses from a truck, because “that’s what people need right now,” Hanley said. The company also will send water and other critical items.

‘Now we know what people need’

“It’s a terrible time to get cleaning supplies, during a pandemic,” Hanley said, “but this is not our first rodeo.” Having endured hurricanes and tropical storms before, “now we know what people need.”

Some of Howell’s Lake Charles employees were just getting back to their homes following last week’s evacuation. “We don’t think any of them had total damage,” Hanley said, although everyone experienced losses, such as food left in refrigerators and freezes that has spoiled without electricity.

Hanley said she’s heard from some of Howell’s suppliers offering help. Everyone will be pitching in. Disasters have a way of demonstrating how closely connected businesses are with their communities.

Howell Furniture was the HFA’s large Retailer of the Year for 2019.

‘We could sell a hundred air conditioners’

About 220 miles northeast of Beaumont, HFA’s other Retailer of the Year for 2019, Brakenridge Furniture of Ferriday, La., was also breathing a sigh of relief. Laura’s path pushed east before hitting landfall last week. The storm path split between Beaumont and Ferriday and veered east, but not enough to cause serious damage to Ferriday. Owner Anna Ferguson said there are still towns in Concordia Parrish without electricity, but for the most part, Ferriday was spared the damage other Louisiana town like Lake Charles felt. No roofs torn off or downed power lines. “We got the eastern edge of it, but that’s about it,” said Ferguson. “We’re all very thankful.”

When Hurricane Katrina hit in 2005, Ferguson said  many residents of her parrish simply dragged their freezers and rotting food to the side of the road. “This time the biggest demand we’ve had is for air conditioning units,” she said. “We could sell a hundred of them tomorrow if we had them, but we can’t get our hands on them. Louisiana in the summer is hot enough, but without air conditioning, it goes from miserable to dangerous.”

Ferguson said her staff has called suppliers in Louisiana like Frigidaire and GE, but no air conditioners are available. “We’ll keep trying,” she said.

Lost power was the biggest problem for Ivan Smith Furniture, which is based in Shreveport, La., and has 44 stores in Louisiana, Texas and Arkansas.

“None of our stores were severely damaged, but we did have about 20 stores without power,” Trey Smith, vice president of the Top 100 retailer, said Tuesday. “As of today, we only have three without power.”

Not a member of the HFA? Let us know you’re interested in joining our community.