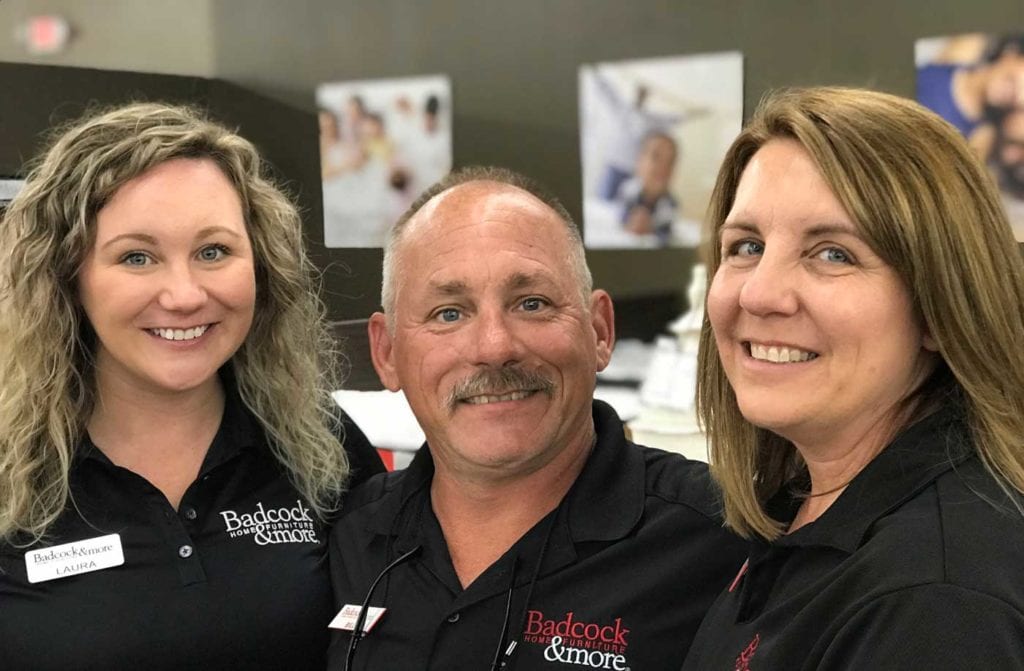 In years past, Bill Freeman was busy during the week of July 4 putting together firework displays for towns and military bases throughout the Mid-Atlantic. But not this week. This week, the licensed pyrotechnic engineer was putting the finishing touches on the grand opening of his third Badcock Home Furniture & more store.

More than two dozen residents of Elkin, N.C. – along with several executives from Home Furnishings Association member Badcock’s corporate headquarters in Florida – showed up Monday to christen the store with a ribbon cutting and donation to a local adoption agency. Oh, and sell some furniture.

“I’m really excited for the opportunities this store has – not just for me but the folks who live here,” said Freeman. “Everyone has been very kind and welcoming to us so far.”

Freeman already owns two Badcock stores in nearby Mount Airy and King. He was making so many deliveries in the Elkin area from his Mount Airy store about 30 miles away that he decided to look into a third store.

He put together a proposal to Badcock’s corporate office and the company gave him the green light. If you’re keeping score, that’s three Badcock stores Freeman has opened in the past two years. Not bad for a guy who never sold a piece of furniture until he opened a store.

That, says Mitchell Stiles Jr., is the difference between Badcock and other franchise furniture stores. Stiles is vice president of dealer retail operations at Badcock.  “When Bill told us he’d never sold furniture before, that was a surprise, but you could also see he was determined, and that’s something that stuck with us,” said Stiles. “We think of every one of our dealers as family, and we’re not going to let them down. We’re always there for them, and that’s what we’ve been for Bill.”

That family was on display Monday with Stiles, Rob Burnette, Badcock’s president, and other corporate officials in town for the ribbon-cutting ceremony. The group had earlier attended a Badcock opening in Lincolnton, N.C., and were traveling to another in South Boston, Va., before wrapping up their week with another store opening in Siler City, N.C.

To mark the store’s opening, Freeman invited residents and community leaders to the store to celebrate. Shoppers got a plateful of barbecue, a North Carolina staple, and were given $50 gift cards. Burnette even made a $2,500 donation to the Ebenezer Christian Children’s Home as a goodwill gesture to the local community.

Freeman’s daughter, Laura, will run the store. “She’s ready,” Freeman says. “She’s going to do a great job, but it’s nice to know we’ve got the Badcock family to help us.”