‘It’s all about selling what you’ve got’ 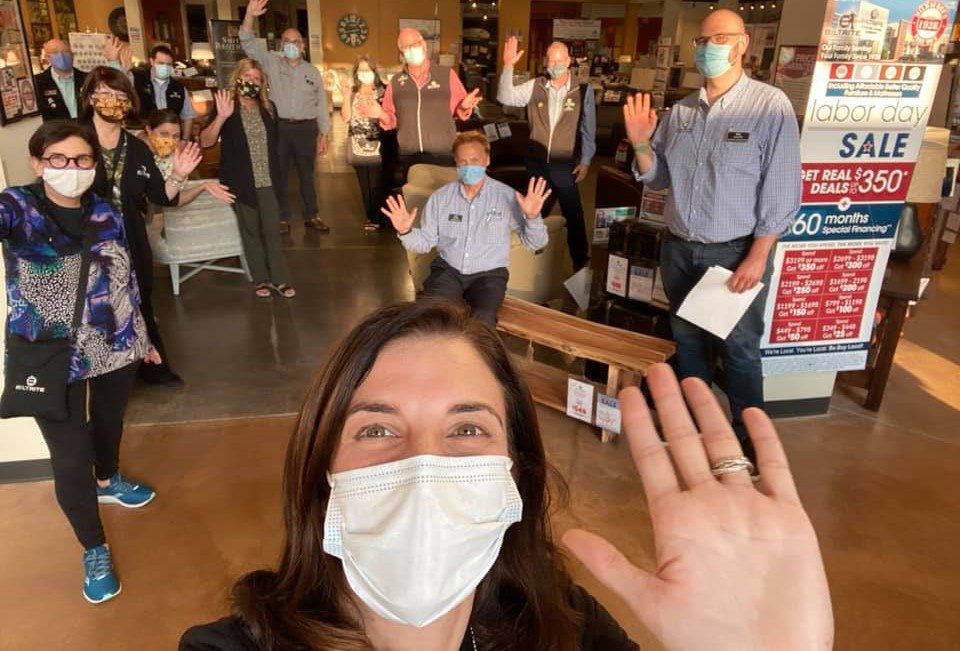 Waiting for furniture may be the rule these days, but the exceptions are lucrative for some Home Furnishings Association members.

Kimbrell’s, in business since 1915, is having a banner year. A new store in Greenville, N.C., is already the second-best producer in the 50-store chain eight months after it opened, and a newer store in Wilmington soon may equal or exceed it, Peters said.

Kimbrell’s directors made a critical decision a few years ago, which is paying off handsomely now.

“Our board decided several years ago they did want to have some nice stores. They spent millions fixing up stores and re-merchandising,” Peters said. “We won’t forget where we came from, but we also want to attract more high-end customers.”

From port to stores to customers’ homes in a week

The Greenville store, for example, occupies about 45,000 square feet in an upscale downtown location. “Holy cow, is this a Kimbrell’s store?” Peters asked rhetorically.

Supplies are constantly replenished, helped by at least four containers arriving daily at East Coast ports – mostly Charleston, S.C. – Peters said. That product generally reaches Kimbrell’s stores in North and South Carolina and Georgia and is sold and delivered to customers’ homes within a week.

The most glaring area where supply is lagging is appliances. “We could use a lot more,” Peters said. But selling appliances kept Kimbrell’s stores in all three states open while many other furniture stores were closed back in the spring, so Peters has few complaints.

BILTRITE Furniture-Leather-Mattresses in Greenfield, Wis., wasn’t as lucky. It was forced to close its doors for many weeks while big-box retailers were allowed to stay open – and sell beds and many other products that independent furniture stores couldn’t. The owners took their complaints to the media and won lots of sympathy from customers. Now, business is back!

“We’ve made up for what we lost, finally,” said Randi Schachter, fourth-generation owner of the 92-year-old business, as she prepared for Saturday’s conclusion to a six-week-long Labor Day sale.

“We always run it for six weeks,” she said. “It’s the best holiday, but it’s enough.”

Contrary to some media reports that high demand and tight supplies force customers to pay high prices, Schachter – who goes by “Randi K” in store advertising – said BILTRITE and its competitors have offered plenty of good deals. That’s especially true for inventory items.

“Clearance items are leaving left and right,” she said. The store “had a huge amount of inventory” when the Covid crisis began, helping it to jump-start sales when it reopened. The pace has hardly slackened.

“Oh my gosh, it’s been such a roller-coaster,” Schachter said. “There’s been such high demand. Almost every day is like a Saturday.”

Customer demand has allowed BILTRITE to clear out older inventory and refresh and rearrange its floor, Schachter said. “The store looks really good,” she added.

Recliners and motion furniture have gotten a bit depleted, but “we still have enough to pick from.”

BILTRITE is still taking lots of special orders, making sure to tell customers exactly how long they likely will wait. Schachter has been pleased with reliable suppliers that are keeping up with demand, including Smith Brothers of Berne and several Amish and other smaller suppliers. Some manufacturers and reps have proven to be much less dependable – and those relationships are being re-evaluated or severed.

Covid likely has permanently changed how BILTRITE will do business. The owners decided four years ago to close on Sundays for family time. This summer, they shortened store hours the other six days.

“We don’t need to be open till 8,” Schachter said they learned. Traffic has actually increased despite the shorter day. With 10-6 hours, there are no more split shifts for employees and everyone can attend the morning sales meeting. And working largely by appointment is crucial. “If someone wants to come in during the 6-to-7 hour, we can schedule that,” she said. Setting special hours for seniors is another successful accommodation that will continue.

‘A ton of inventory’ for 50 cents on the dollar

“We need to show it to sell it,” he explained. It’s just that customers usually wanted to buy it in a different color, fabric or some other variation.

They’re a little less selective now that special orders are generally taking longer to fulfill. So, special orders have dipped to 70 percent of sales. “The other people are not willing to wait,” Watson said.

No waiting was required recently for one of Hoot Judkins’ most successful inventory sales. Watson’s long-time supplier of kids’ furniture, a San Francisco Bay-area importer and distributor, decided to retire, with “a ton of inventory” in his warehouse. “I bought everything he had for 50 cents on the dollar,” Watson said. The near-immediate turnaround helped boost September sales to 38 percent ahead of September 2019. Youth furniture typically comprises 10-12 percent of the store’s overall revenue. The one sale will boost that to at least 15 percent for 2020, Watson said.

Hoot Judkins also passes on saving to customers. It’s currently offering up to “70 percent off clearance” for its 58th anniversary. Attracted more often by digital advertising, customers visit the store ready to buy. “People don’t come in to kick the tires,” Watson said.

After such a dire spring and early summer, this year’s business is now generating such strong cash flow, Watson said, that he asks suppliers for a “quick-pay” discount of 1 or 2 percent – and they almost always say yes. That doesn’t sound like much, he said, but it adds up.

[Cash is critical during a crisis, HFA panelists say]

The messages from Colorado Style Home Furnishings are welcome news for Denver-area shoppers who want it now:

“Over an acre of fine furniture in stock and ready for immediate delivery.”

And: “Thousands of items ready for immediate delivery.”

Shoppers see that message when they look at the Colorado Style website and social media. They hear it when they call. And they find it when they visit the sprawling store in the Highlands Ranch community, elevation 5,920 feet.

Business is great, said owner Brent Simon, who offers customers a “live inventory. If you like something, you can take it home today.” As competitors struggle with long delays, Colorado Style entices shoppers who want to invest more in their homes. Working with a wide array of suppliers definitely gives Colorado Style an advantage and attracts new customers. “I don’t think everybody has the fluid inventory we do,” Simon said.

Colorado Style, which sells high-end furnishings, rugs, lighting, bedding and outdoor furniture, always takes plenty of special orders. Lately, sales are skewing a little more toward what Simon calls “the satisfaction of taking it home today.” The business model of constantly replacing inventory and refreshing the floor to create a different look at least weekly perfectly meets many customers’ desires at a time when they aren’t spending money on vacations, travel or even eating out.

‘We have our foot on the gas’

“A lot of people are trying to make their home an oasis,” Simon said, noting that his yard service is having a record year, too.

Things didn’t look hopeful from late March until May – long weeks when the business had to close and shipments stopped. But with the Rocky Mountain spring, “the floodgates were opened,” Simon said.

The business has had to be “quick on our feet” to adjust as some suppliers have had trouble catching up to demand, Simon said. A major vendor, Fine Furniture Design, ceased operations. But others have filled the gaps. And Colorado Style partners with artisans, blacksmiths and craftsmen who produce unique, hand-crafted pieces and never slowed their pace.

He doesn’t know how long this extraordinary demand will continue, but for now, “We have our foot on the gas.”

And even better: Lots of furniture ready to deliver today.