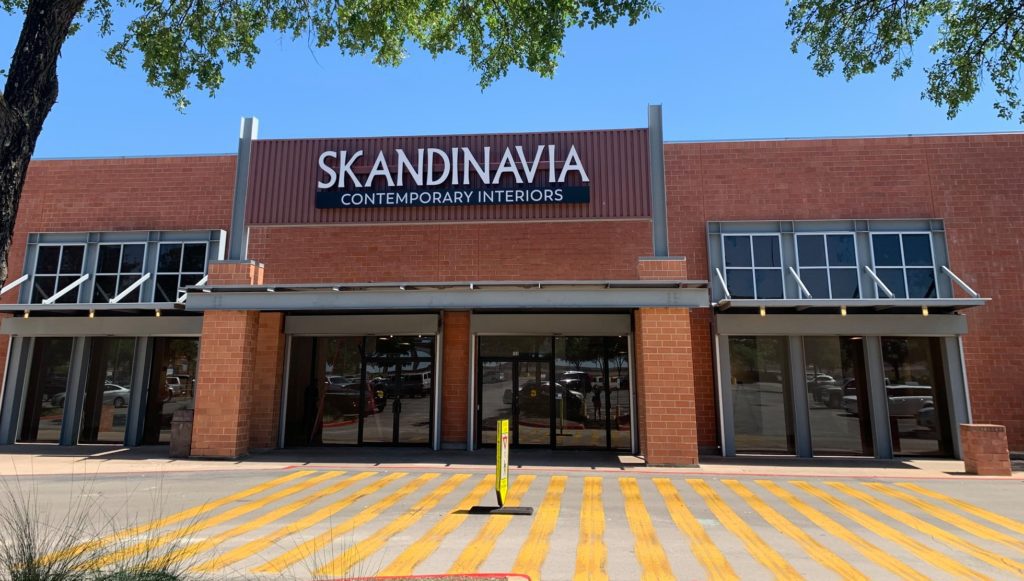 Skandinavia Contemporary Interiors in Austin, Texas, reopened for business on Memorial Day. Unlike other retailers that were forced to close during the coronavirus outbreak, however, Skandinavia’s owners had been planning their reopening for two years.

Shawn and Erika Olsen closed their store on Shoal Creek Boulevard in March, a couple of years after ownership of their building changed hands and they were told that renewing their lease would cost a lot more. They had plenty of time to scout for new opportunities, and “We found what we hope is a much better location,” Shawn Olsen said last week.

It’s on South Lamar Boulevard, about 10 miles south of their former store and a bit closer to downtown. It’s also near the intersection of two highways, an area that sees “a lot of traffic in normal times.”

Of course, these are still not normal times. Austin, the state capital and home of the University of Texas, was shut down for weeks because of the coronavirus. Students were sent home and the South by Southwest conference and festivals were canceled. For Skandinavia, there was a “silver lining,” Olsen said. “We had planned to be closed and had made arrangements for that.”

Still, the doors were shut for a little longer than anticipated. The Olsens were doing a “build out” and renovation of their new building. But work was halted for a couple of weeks during the shutdown, and other delays pushed the reopening to Memorial Day.

Olsen secured a Paycheck Protection Program loan and kept all his employees on the payroll, even though there was little work for them to do. Now, the new store – 24,000 square feet, compared to 15,000 at the old location – is operating at regular hours. Still, “it’s been slow, but we’re getting some people coming in,” Olsen said. “We’re getting some sales, but not a lot.”

He expects that to change. Before the public health crisis, Austin was one of the fastest-growing cities in the country and “it will pop up OK,” he said. The store is next to Central Market, a top-rated grocer, according to Olsen. People who shop there also buy home furnishings like those sold by Skandinavia Contemporary Interiors, which was founded in 1971 to feature designs inspired by the Danish modern movement. It carries collections by American Leather, Copeland, BDI and Ekornes.

So, this might be a good time to open a bigger store and to count on bigger spending on home furnishings. On the other hand, Olsen admits to some uncertainty in an altered environment.

“We don’t have any idea of shopping trends in the next six months,” he said. “We do know they’ve changed.”